Some Yummy Recipes To Try 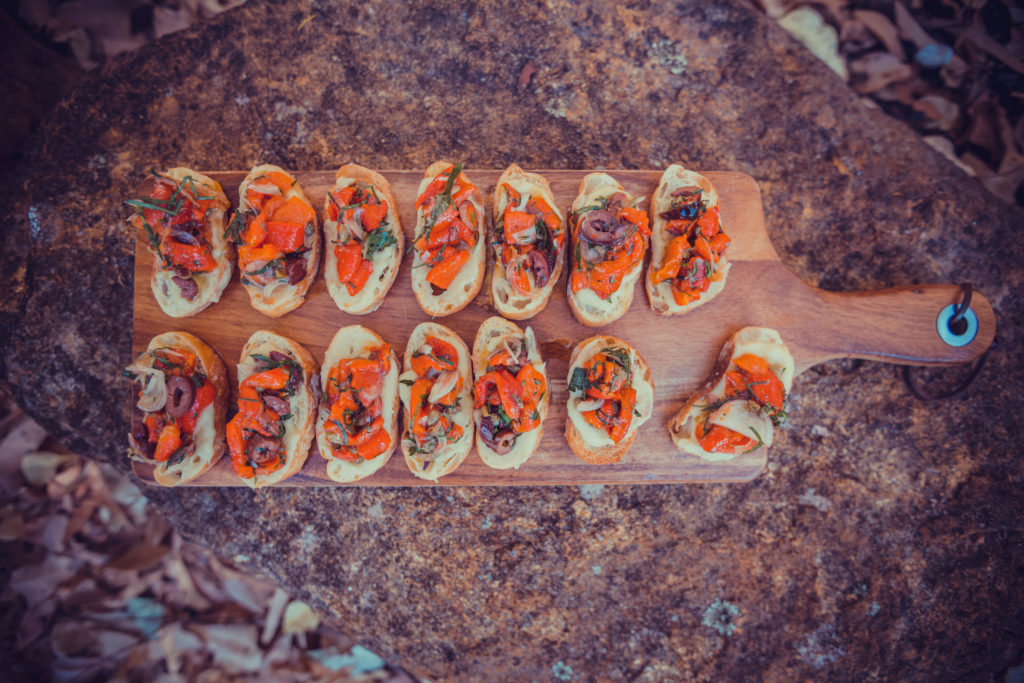 We have just finished this year’s tours. We have met some wonderful people, and hope that they enjoyed their time with us as much as enjoyed showing them our Bella Tuscany.

During our time off, we have been able to explore different regions of Italy, including the rolling hills of Marche. The Olive all’ Ascolana in the following blog are from this region.

And the Crostini with a Peperonata Salsa is to die for!

Follow these up with the Slow Braised Pork Ribs and Finnocchi Gratinata.  Buonissimo!!

Crostini with a Peperonata Salsa

Serves 6 as a canapé

Brush one side of the baguette slices using a pastry brush and only using half of the extra virgin olive oil. Cook in a moderate oven only 150 degrees until they have become crisp, you do not want them to become too brown. Roughly dice roasted capsicum into 1cm cube pieces and place in a bowl, add in olives, capers, shallot and parsley and season with extra virgin olive oil, lemon juice and salt and pepper.

Spoon your peperonata onto your crostini and serve, you can top with a shaving of parmesan if you want to.

Finely chop your salami and combine with the pork mince in a mixing bowl.

Meanwhile dry roast the fennel seeds in a fry pan until on a low heat for about 5 minutes. Grind afterwards in a mortar and pestle to a powder form. Add this to your pork mix along with the chopped parsley and parmesan.  Season with a little salt and pepper. Stuff each olive with some of the pork mixture. If you cannot stuff the olive easily enough, simple finely chop your deseeded olive and mix it into your pork mixture well and then mould to form an olive shape and place on a tray.

Make a crumbing station; place the flour in 1 bowl, then you breadcrumbs in another and whisk the eggs with a little milk. Pass the olive in the four, then the egg mix and lastly in the breadcrumbs. Crumb well so that the olive is coated evenly in bread crumbs.  Deep fry in some vegetable oil at 180 degrees until golden brown.

Heat a heavy based casserole pan and add in the olive oil, brown the ribs on all sides and season with some salt and pepper. Deglaze the pan with white wine and leave to reduce.  Add in the water and turn down the heat to a low simmer and cover with a lid.   Cook for about 1 to 1½ hours, checking them occasionally and if the liquid has reduced add in ½ cup of water as needed. Continue to cook until the ribs are tender and remove the lid and allow the liquid to reduce to a sauce consistency.

Serve the ribs as a main meal

Heat the oven to 180°C. Boil the whole fennel in lightly salted water for about 15 – 20 minutes or until they are cooked enough so you can slide a skewer in.  Drain well and divide each one in half lengthways and cut each half into 4 pieces vertically.  You want the pieces to stay attached at the stem.

Pat the pieces in the flour. Grease an oven dish with a little of the butter and then place the fennel in a single layer.  Season with salt and pepper and grate some fresh nutmeg over the fennel. Pour over the milk and add dobs of butter and then the parmesan cheese.  Bake for about 35 minutes or until the top is golden and the sauce has thickened a little.  Serve immediately.

No Replies to "Some Yummy Recipes To Try"